by Perform!
in Dance, Performer Profiles, Uncategorized
on October 10, 2014 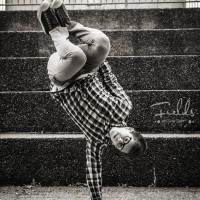 Nathaniel “Natorious” Dooks has been breaking for three years Now. As of a year ago he was asked to join local breaking group “FLASH crew” who he has competed with around Canada from New Brunswick to Montreal placing top 16 and in some cases top 4. He’s competed in such local jams as Roast the Coast, Kings of the East and Floor wars where he made semi-finals two years running.