by Perform!
in Dance, Performer Profiles, Uncategorized
on September 20, 2017 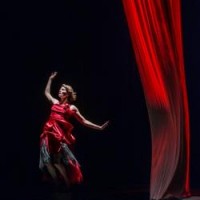 Lisa Phinney Langley is a dance artist with degrees in physics and atmospheric science. Her curiosity is driven by the quest for fundamental beauty, and the belief that diverse perceptions and phenomena can be traced back to common truths. Trained at Halifax Dance and the School of TDT, Lisa toured with CORPUS and KdD2 before returning to Halifax in 2003 where she co-founded Mocean Dance and was co-artistic director until 2005. In 2010 she launched Phin Performing Arts to support her creative work. Lisa has worked under the tutelage of Crystal Pite, Susie Burpee, Tedd Robinson, and Noam Gagnon. Her work, Analogy for Solid Bones, was nominated for the 2010 Nova Scotia Lieutenant Governor’s Masterworks Award and prompted one reviewer to state, “Conservationists take note: If you want people to pay attention, partner with an artist.” Lisa lives in Halifax with her husband and two beautiful children.